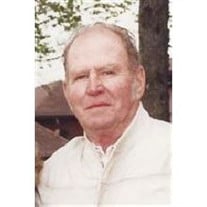 Walter Lloyd Mitchell, 91, of Ridge Road, New Bethlehem, died early morning on Wednesday, December 12, 2012, at his home. Born October 18, 1921 in Rimersburg, he was the son of the late Walter and Mina Flick Mitchell. A veteran, he entered in the Army in 1942 during WWII.  He served three years in the 393rd Infantry, with one year spent in the European Theater during the Battle of the Bulge as a radio operator and expert rifleman.  He had many stories to tell of his tour.  He was discharged in October of 1945. He was married on December 7, 1945 to the former Jean Rankin, and she survives. The couple moved to Arizona in 1965 where they owned and operated a moving and storage business.  He also worked for the Navajo Army Depot in Flagstaff, Arizona.  After 17 years, they returned to Pennsylvania and settled in the Limestone area to spend their “golden years.” Walter worked a few years at the Owens-Illinois Glass Plant in Clarion and then built and operated his own grocery store and service station in Clarion and later another one in Reidsburg.  He attended the New Rehoboth Greenville Presbyterian Church in Clarion. Walter loved hunting, fishing, camping, golfing, and square dancing. In addition to his wife, he is survived by two grandchildren, Dustin Mitchell of Meadville, and Denton Mitchell of Indiana; and daughter-in-law, Jan Mitchell of Clarion. Also surviving are two brothers-in-law, John Rankin and his wife, Norma, of Orange, TX, and William Rankin and his wife, Joy, of Hemet, CA; and a sister-in-law, Connie Rankin of Fairmount City. He was preceded in death by his parents; a son, James Mitchell; three sisters, Doris Fowler, Mildred Yates, and Ida Belle Gallagher; an infant brother; and four brothers-in-law, Kenneth Rankin, Ross Rankin, Robert Rankin, and Richard Rankin. There will be no visitation. A memorial service will be held on 2:30 p.m. on Sunday, December 16, 2012, at the New Rehoboth Greenville Presbyterian Church, Clarion, with Rev. James Dietrich, pastor of the New Rehoboth Greenville Presbyterian Church, officiating. Following the service, the family will receive friends. The arrangements are under the direction of the Robert V. Burns Funeral Home, 638 Wood Street, Clarion. Interment will be held in the New Rehoboth Greenville Presbyterian Church Cemetery. Memorials and donations can be made to the Alzheimer’s Association, 360 Lexington Avenue 4th Floor, New York, NY 10017; or to the Clarion Hospital Cancer Center, One Hospital Drive, Clarion PA 16214.

Walter Lloyd Mitchell, 91, of Ridge Road, New Bethlehem, died early morning on Wednesday, December 12, 2012, at his home. Born October 18, 1921 in Rimersburg, he was the son of the late Walter and Mina Flick Mitchell. A veteran, he entered... View Obituary & Service Information

The family of Walter Lloyd Mitchell created this Life Tributes page to make it easy to share your memories.

Send flowers to the Mitchell family.