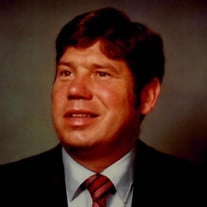 William F. “Lad” Dolby, 83, of Strattanville, passed away peacefully Wednesday evening, April 7, 2021 at his home surrounded by his family. He was born on September 7, 1937 in Franklin; son of the late Jess Fred and Mary Jane “Molly” Shew Dolby. Lad proudly served in the US Army Reserves. He married the former Shirley A. Hollenbaugh on April 8, 1961, who survives. They would have celebrated their 60th Anniversary the day after his passing, April 8, 2021. Lad worked as a mechanic at Owens Illinois Glass Plant in Clarion, retiring after 40 years. He was a member of the First United Methodist Church of Clarion. Lad was also a member of the Masonic Lodge of Clarion and the N.R.A. His favorite time was spent camping, swimming, and trips to the beach with his children and grandchildren. Lad also enjoyed cross country skiing, bicycling, hunting, fishing with his family and friends, and being outside with his dogs. In his earlier years, he enjoyed flying his plane, being on his boat, and waterskiing. He is survived by his loving wife, Shirley; a son, Jeffrey Dolby and his wife, Cindy, of Sligo; three daughters, Laura Heasley, Patricia Dolby, and Penny Mendenhall, all of Strattanville; two grandsons, Douglas Heasley and Braxton Mendenhall; and numerous nieces and nephews. Lad was preceded in death by his parents; his brother, Russell H. Dolby; and his sister, Janet E. Gray. The family will receive friends from 1 p.m. to 3 p.m. and 5 p.m. to 7 p.m. on Sunday, April 11, 2021 at the Robert V. Burns Funeral Home in Clarion. Additional viewing will be held from 10 a.m. to 11 a.m. on Monday, April 12, 2021 at the First United Methodist Church in Clarion with services to follow at 11 a.m. in church with Rev. John Flower, pastor presiding. Interment will follow in the Cedarview Memorial Park in Strattanville. In lieu of flowers, Memorials or donations can be made in Lad’s name to the First United Methodist Church, 600 Wood Street, Clarion, PA 16214, the Clarion Forest VNA Hospice, 271 Perkins Road, Clarion, PA 16214, or to the Strattanville Volunteer Fire Company, PO Box 93, Strattanville, PA 16258.

The family of William F. Dolby created this Life Tributes page to make it easy to share your memories.