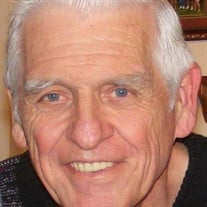 William Leonard Etzel, 81, of Clarion, passed away due to congestive heart failure at his home on Friday, June 7, 2019, surrounded by his family. He was born on July 16, 1937 in Clarion; son of the late Albert Leonard and Sara Pearl (Williams) Etzel. Bill graduated from Clarion High School in 1955. He was married on February 20, 1960 to Irene Geneveive Clinger at the Immaculate Conception Catholic Church in Clarion. She preceded him in death on April 19, 2012. He was employed at Owens-Illinois Glass Plant #17 of Clarion for 37 years, retiring in July of 1992. For most of his career, he worked as a powder-spray expert in the Decorating Department. Bill later moved into a management position in the Selecting Department, where he worked until his retirement. Bill and Irene were blessed with three children; their sons: David and Brian; and daughter: Lisa. They were devoted parents who volunteered their time to several local youth organizations. Bill helped to organize Clarion Little League and later, served as league president. He was instrumental in improving the field and preserving a place for children to participate in Little League baseball. Bill also served as Scout Master for Boy Scout Troop 51 of Clarion. An Eagle Scout himself, one of his proudest moments was when his son, David, joined him as an Eagle Scout in 1976. He also supported his children in their academic and extra-curricular activities. Bill spent his retirement years using his artistic skills in woodworking and crafting with his wife. He also dedicated himself to serving as caregiver for his aging parents and his wife prior to their passing. His kind spirit and generous heart will be missed by his family and those whose lives were touched by his service to the community. He leaves behind his sons: David and his wife Sherry of Clarion and Brian and his wife Laurie of Austin, TX; and his daughter: Lisa of Austin, TX. Also surviving are his grandsons: Jamison Etzel and his wife Joni Carroll of Pittsburgh; Spenser Etzel of Los Angeles, CA; Ezra Etzel of Little Silver, NJ; Kyle Etzel and his wife Rae Gabrielle of Austin, TX; and his granddaughter: Madalyn (Etzel) Stoner and her husband Chris of Lakewood, OH. Bill was preceded in death by his parents; wife; brother: Robert Lee Etzel; and sister-in-law: Carol Yvonne (Reed) Etzel. The family will receive friends from 6 p.m. to 9 p.m. on Tuesday, June 11, 2019 at the Robert V. Burns Funeral Home in Clarion, 638 Wood Street. Funeral services will be held at 11 a.m. on Wednesday, June 12, 2019 in the funeral home with Rev. Monty Sayers, pastor of the Immaculate Conception Catholic Church of Clarion. Interment will follow at the Immaculate Conception Mausoleum. In lieu of flowers, donations or memorials can be made in William’s name to the Clarion Forest V.N.A., 271 Perkins Road, Clarion, PA 16214 or to the St. Jude Children’s Research Hospital, 262 Danny Thomas Place, Memphis, TN 38105.

William Leonard Etzel, 81, of Clarion, passed away due to congestive heart failure at his home on Friday, June 7, 2019, surrounded by his family. He was born on July 16, 1937 in Clarion; son of the late Albert Leonard and Sara Pearl (Williams)... View Obituary & Service Information

The family of William L. Etzel created this Life Tributes page to make it easy to share your memories.

William Leonard Etzel, 81, of Clarion, passed away due to congestive...

Send flowers to the Etzel family.