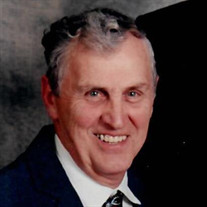 William R. “Bill” Fink, 87, of Strattanville, passed away Thursday, May 9, 2019 surrounded by his family at his home following a declining in his health over the last several years. Bill was born on October 26, 1931 in Clarion; son of the late Ray and Twila Davis Fink. He married Twila M. Rex on April 1, 1955, who preceded him in death on December 6, 2017. Bill worked at the Owen’s Illinois Glass Plant, retiring after 37 years. He attended the Hope Rising Community Church in Clarion. Bill enjoyed baseball, horseback riding, hunting, and fishing. Most of all, Bill loved racing with his son and grandson. He is survived by his son: Brian Fink and his wife Lori of Strattanville; five grandchildren: Dan Fink and his wife Marie of Emlenton, Jill Spence and her husband Tom of Shippenville, Kyle Fink of Strattanville, and Brilyn Fink and Jennifer Fink, both of Pittsburgh; two step-grandchildren: Jennifer Forquer and her husband John of Kane and Daniel Moore of Strattanville; four great grandchildren: Joseph and Brooklyn Spence and Mason and Logan Fink; and numerous nieces and nephews. Bill is also survived by his two brothers: Don Fink and his wife Roberta of Rimersburg and Bob Fink and his wife Shirley of Butler; a sister: Jean McCleary of Florida; and a brother-in-law: Ken Haines of Corsica. He was preceded in death by his parents, wife, his two sons: Rodney and Bill Fink, a daughter-in-law: Kristine Fink, a sister: Betty Haines; and a brother: Gary Fink. The family will receive friends from 10 a.m. to 11 a.m. on Monday, May 13, 2019 at the Robert V. Burns Funeral Home in Clarion, where funeral services will follow at 11 a.m. in the funeral home with Rev. Harry Hoff, pastor of the Hope Rising Community Church in Clarion. Interment will follow in the Cedarview Memorial Park in Strattanville.

The family of William R. Fink created this Life Tributes page to make it easy to share your memories.

Send flowers to the Fink family.