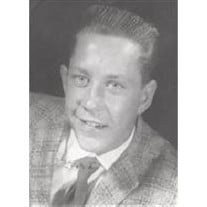 William R. “Bill” Hoover 71, of 1401 Morris Street Sligo PA, Passed away at home on March 30, 2014 after a brief illness. Born on April 12th 1942 in Dubois PA he was the son of Daniel “Sarge”  and Donna Fink Hoover. Bill was a veteran serving in the Army Reserves. He was married on November 9th 1985 to the former Betty Hillwig, and she survives. Bill worked the National Fuel and Gas Company for 33 years retiring in 1997. He was of the Methodist faith. Bill enjoyed camping, hunting, and coaching Little League. In addition to his wife, Betty, he is survived by a daughter Wende Slocum and her husband, William, of Mercer. Stephen Hoover and his wife, Machelle, of Mercer. And Clayton Hoover of Sligo. 4 grandchildren Dakota, Preston, Avery, And Annalyse. Also surviving are 2 sisters, Toni Shick, and her husband Kent of Dubois. And Donna Pontius, and her husband Bill of Williamsport. He was preceded in death by his parents, infant daughter, and a sister. Family will receive friends from 2 to 4 p.m. and 6 to 8 p.m. on Wednesday April 2, 2014, at the Burns Funeral Home and Crematorium Inc., 434 Main Street Rimersburg, PA 16248. Online condolences can be sent to the family by visiting www.rvburnsfuneralhome.com

The family of William R Hoover created this Life Tributes page to make it easy to share your memories.

Send flowers to the Hoover family.