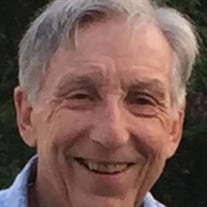 William “Bob” Robert Kennedy, 75, of Avella, PA, passed away with family by his side at 3 p.m. Monday, September 25, 2017. Bob resided at the McKinley Health Center at Laurelbrooke Landing, Brookville, since March 2017, diagnosed with Lewy Body Dementia. He was born on February 15, 1942 in Butler, son of the late Willis L and Pauline (Winters) Kennedy. Bob graduated from McGuffy High School, Washington and Jefferson College, Millersville University for his Masters, and Kent State University for his PHD. He taught Special Education in West Middlesex, PA Elementary School. Bob then worked at Case Western Reserve University, followed by Saint Elizabeth’s Hospital in Youngstown, OH as the Director of Medical Education. He retired at age 55 to live and work at the family homestead. Bob told the best stories. His most favorite times were those spent with family and friends. He also enjoyed painting landscapes, carving decoy ducks, fence posts, and personalized signs for family and friends, and cookies. He loved to travel to visit historical locations throughout the United States. Bob also enjoyed reading and owned a large book collection. Bob was the husband to Diane J. Mitch Kennedy, father of Julianne Dechant and her fiancé Dennis Hill of Knox and Michael Kennedy and his wife Jackie of Johnstown, grandfather “Pap Pap” to Laura and Tyler Weisenstein and Dakota, Dayne, and Kobyn Kennedy. In addition to his wife, children, and grandchildren, Bob is survived by his sisters, Consuello Sheller and her husband Gene and Cynthie Johnson and her husband Dan, her nieces, Maria and Gena Sheller, and Samantha Dye (Sheller), and his nephews, Sean and Joel Johnson, sister-in-law, Jackie Mitch, his many beloved cousins, and dogs, Jennie, Laddie, and Gus. Bob was preceded in death by his parents, Aunts, Uncles, In-laws, Mary and William Mitch, and a son-in-law, Bernard Dechant. At Bob’s request there will be no services. The Robert V. Burns Funeral Home in Clarion is handling the arrangements. The family would like to thank the Clarion Forest VNA Hospice and the caring staff at Laurelbrooke Landing, Brookville. Memorial donations may be made to the Lewy Body Dementia Association, 912 Killian Hill Road SW Lilburn, GA 30047 or to the Clarion Forest VNA, 271 Perkins Road, Clarion PA 16214.

William &#8220;Bob&#8221; Robert Kennedy, 75, of Avella, PA, passed away with family by his side at 3 p.m. Monday, September 25, 2017. Bob resided at the McKinley Health Center at Laurelbrooke Landing, Brookville, since March 2017, diagnosed... View Obituary & Service Information

The family of William R. Kennedy created this Life Tributes page to make it easy to share your memories.

Send flowers to the Kennedy family.