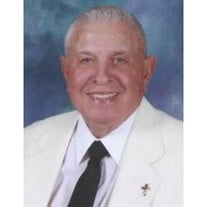 William D. McElravy , 87, of Clarion, passed away on Saturday, February 18, 2017 in Pittsburgh. He was born on August 21, 1929 in Vandergrift, PA; son on the late Wayne and Mabelle Curll McEravy. Bill graduated from Clarion High School in 1947. He was married on June 15, 1951 to Helen M. Hilliard of Sligo, and she survives. Bill was a veteran of the U.S. Air Force and served as a Sargent during the Korean War. He retired from Owen’s Illinois Glass Plant after working in the forming department. Bill was a member of the United Methodist Church in Clarion. He was a member of the American Legion Post #0454 of Rimersburg, the Eagles Club of Clarion, and served on the Sligo Borough Council. Bill was a past member of the Sligo Lions Club where he served as President and Secretary, the Owen’s Illinois Gold Emblem Club, and the Quarter Century Club where he served as President. Bill was also a member of the Clarion Masonic Lodge #277 where he served as Treasurer, a member of the Coudersport Consistory 32 Degree, and the Clarion County Consistory Club of Coudersport where he served as past President, the Zem Zem Shirne of Erie and the Clarion County Shrine Club. He enjoyed hunting and riding his motorcycle. Bill is survived by his wife, one son, David D. McElravy and his wife Denise Hawk of Sligo, two grandsons, David D. McElravy and his wife Fernanda of Florida and their children, Ava and Ella and Jamie McElravy and his wife Chrissy of Rimerburg and their daughter, Morgan, a sister-in-law, Shirley McElravy, his nephews, Rob, and Scott, a sister-in-law, Mary Jane Putman, and a niece, Terri Eastman. He was preceded in death by his parents, a brother, Robert McElravy, a brother-in-law, Bill Putman, and a nephew, Mike. Family will receive friends from 2 p.m. to 4 p.m. and 7 p.m. to 9 p.m. on Wednesday, February 22, 2017 at the Robert V. Burns Funeral Home in Clarion. A Masonic Service will be held at 7 p.m. on Wednesday in the Funeral Home. Military Honors will be accorded by the American Legion Honor Guard Post #0454 and the VFW Post #7132 of Rimersburg at 10:45 a.m. on Thursday, February 23, 2017 in the Funeral Home where Funeral Services will follow at 11 a.m. with Rev. Clayton Harriger, pastor of the Gipsy Christian Church in Gipsy, PA. Interment will following in the Rimersburg Cemetery. Donations can be made to Zem Zem Temple in care of Children’s Hospital for Children at 2525 West 38th Street, Erie PA.

William D. McElravy , 87, of Clarion, passed away on Saturday, February 18, 2017 in Pittsburgh. He was born on August 21, 1929 in Vandergrift, PA; son on the late Wayne and Mabelle Curll McEravy. Bill graduated from Clarion High School in... View Obituary & Service Information

The family of William D. McElravy created this Life Tributes page to make it easy to share your memories.

Send flowers to the McElravy family.