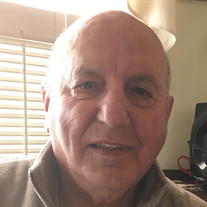 William J. Smerkar, 83, of Marble, passed away Monday, August 28, 2017 at the Butler Hospital. He was born on November 19, 1933 in Fryburg. The son of the late John and Amanda Schettler Smerkar. Bill attended St. Michael’s grade school and graduated from Shippenville High School in 1952. He served his country in the U.S. Army as a tank driver from December 1954 till December 1956. Bill married on July 21, 1962 to Marilyn L. Hartzell, who preceded him in death. He was employed at Glass Containers in Knox for 20 years, until it closed in 1986, for the next 10 years he worked in the Receiving Department at the Clarion Hospital, and then delivered prescriptions for Med-Fast RX for several years. Bill is a member of the Immaculate Conception Catholic Church in Clarion. He enjoyed spending time outside mostly doing work in his yard and watching the Pittsburgh Pirates and Steelers. Bill is survived by his children, Rodney Smerkar and wife Wendy of O’Fallon, MO and Shelly Ruud and husband Eric of Hopewell; Two granddaughters, Kylie Ann Fitzergrald and husband Ryan of Hopewell and Lauren Smerkar of O’Fallon, MO. He is also survived by two sisters, Rita Kiser and husband Frank of Shippenville, Doris Cherico of Clarion and many loving nieces and nephews. Bill is preceded in death by his parents, wife, brothers; Raymond and Robert Smerkar, four sisters; Thelma Thomas, Mildred Strickenburger, Betty Miller and Ruth Morocco. Family will receive friends from 10:00 am to 11:00 am Friday, September 1, 2017 at the Immaculate Conception Catholic Church in Clarion where Mass of Christian Burial will be celebrated at 11:00 am with the Reverend Monty Sayers preceding. Entombment will take place at the Immaculate Conception Catholic Cemetery. Condolences may be sent to the family at www.rvburnsfuneralhome.com

William J. Smerkar, 83, of Marble, passed away Monday, August 28, 2017 at the Butler Hospital. He was born on November 19, 1933 in Fryburg. The son of the late John and Amanda Schettler Smerkar. Bill attended St. Michael&#8217;s grade school... View Obituary & Service Information

The family of William J. Smerkar created this Life Tributes page to make it easy to share your memories.

Send flowers to the Smerkar family.