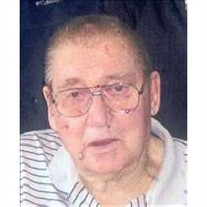 Willis Clyde Dolby, 80, of Miola Road, Clarion, died at 12:45 a.m. Sunday morning, Jan. 18, 2009, at the Golden LivingCenter in Shippenville, where he had been a resident for the past several years. He was the oldest and last surviving member of his immediate family. Born May 5, 1928, in Helen Furnace, Clarion County, he was a son of the late Lewis and Anna Shrum Dolby. He was married July 17, 1954, to Josephine Drayer and they celebrated their 40th anniversary in July 1994. She preceded him in death on March 13, 1995. Mr. Dolby was a U.S. Marine Corps veteran, serving from 1946 to 1948. He was stationed in Europe and also Washington D.C., where he worked funerals at the Arlington National Cemetery. He worked as a laborer for the union labor local 952 until his retirement in 1990 and was a former tax assessor for Highland Township. He was a member of the Helen Furnace United Methodist Church and belonged to the American Legion Post #66 in Clarion. Mr. Dolby farmed his father’s homestead for many years and enjoyed gardening, cooking and canning his own foods. He was an avid card player and loved to hunt, fish and have cookouts with his family. His theory was if it wasn’t a Ford, it wasn’t a vehicle. He is survived by a son, Douglas E. Dolby and wife, R. Jean, of Leeper; three daughters, Darlene Heasley and husband, Ed, of Leeper, Diane Call of Clarion and Denise Shufesky of Marienville and husband, Dave, stationed in Iraq; and eight grandchildren, Matthew Heasley and wife, Yolanda, of Leeper, Melissa Austen and husband, Scott, of Clarion, Amanda Call and friend, Jake Snyder, of Clarion, Chris Call and friend, Erica Keck, of Clarion, Beth Baker and husband, Josh, of Leeper, Rob Sorrell and friend, Tosha Shumate, of Leeper, Amanda Sorrell and friend, Kyle Davidson, of Garland and Adam Sorrell, serving with the army in Fort Benning, Ga. He is also survived by seven great-grandchildren, Kaoz and Harmony Baker of Leeper, Matthew Graham of Rocky Grove, Brittany Graham, Austin Stelene, Cody Stelene and Joel R. Sorrell III, all of Leeper; a brother-in-law, Ralph Hedrick of Clarion; a sister-in-law, Susan Dolby of Dubois; and numerous nieces and nephews. In addition to his parents and wife, Mr. Dolby was preceded in death by two brothers, Melvin Dolby and John Dolby; two sisters, Joan Hedrick and Shirley Schmader; and an infant sister, Diana Dolby. Visitation will be from 2 to 4 and 7 to 9 p.m. Tuesday at the Robert V. Burns Funeral Home in Clarion, Military honors will be accorded by the American Legion Post #66 at 10:45 a.m. Wednesday in the funeral home. Funeral services will be held at 11 a.m. Wednesday in the funeral home with the Rev. Mark Hurst, pastor for the Helen Furnace United Methodist Church, officiating. Interment will take place in the Miola Cemetery. At the request of the family, there will be no donations.

Willis Clyde Dolby, 80, of Miola Road, Clarion, died at 12:45 a.m. Sunday morning, Jan. 18, 2009, at the Golden LivingCenter in Shippenville, where he had been a resident for the past several years. He was the oldest and last surviving member... View Obituary & Service Information

The family of Willis Clyde Dolby created this Life Tributes page to make it easy to share your memories.