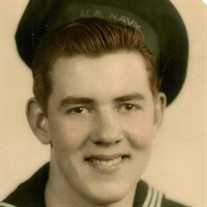 Willis J. Jones, 93, of Clarion, passed away on Saturday, July 18, 2020 at his home. He was born on August 16, 1926 in Reidsburg; son of the late Willis B. and Grace E. Ferringer Jones. Willis married Betty L. Botzer on May 16, 1949; who preceded him in death on February 24, 2012. He was a self-employed carpenter. Willis served in the Navy during WWII on the USS Lake Champlain as a Seaman First Class. He was a member of the Christian & Missionary Alliance Church of Clarion and recently attended the First Baptist Church of Clarion. Willis was also a member of the McDonalds Men’s Breakfast Club in Clarion. He enjoyed tinkering on mowers and tractors and building things. Willis is survived by his son: Willis E. Jones and his wife, Barbara, of Clarion; his daughter: Sandra J. Sowl and her husband, Stan, of Clarion; four grandchildren: Bridgette L. Beinhaur and her husband, Matthew, Matthew H. Sowl and his wife, Amber, Lori Beth Jones and her friend, Tim Williams, and Staci J. Rodgers and her husband, Josh; and four great grandchildren: Kayte and Bailey Beinhaur and Kyra and Jordan Rodgers. He is also survived by his sister: Shirley Emings and her husband, Joe, of Clarion and his special friend: Jeannie Dunmyre, also of Clarion. Willis was preceded in death by his parents; his wife; and a sister: Patricia Sloan. There will be no public visitation. A Military Service will be accorded by the American Legion Post #066 of Clarion at 11 a.m. on Wednesday, July 22, 2020 at the Robert V. Burns Funeral Home in Clarion with funeral services to follow. Interment will follow in the Clarion Cemetery.

The family of Willis J. Jones created this Life Tributes page to make it easy to share your memories.

Send flowers to the Jones family.