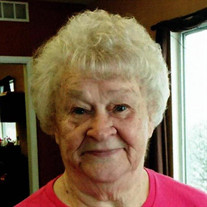 Wilma J. Smail, 88, of Corsica, passed away early Tuesday morning, August 25, 2020 at Penn Highlands, Jefferson Court in Brookville. She was born on September 30, 1931 in Miola; daughter of the late Charles W. and Essie Mae Clinger Hannold. Wilma married David Smail on December 6, 1948, who preceded her in death on July 16, 1995. She was a loving and devoted homemaker, mother, and wife. Wilma spent years being a help mate to her husband on their farm. She was of the Protestant Faith. Wilma read her bible daily and worshipped every Sunday. She loved to read, bake, crochet, and spend time with her family. Wilma is survived by her two sons: Ralph E. “Pete” Smail and Ronald A. Smail, both of Corsica; three daughters: Wilma Lee Johnson of Erie, Karen Lott and her husband, Charles, of Corsica, and Sandy Ferguson and her husband, Martin, of Summerville; nine grandchildren; fourteen great grandchildren; and two great-great grandchildren. Wilma is also survived by her brother: Robert Hannold of Sigel; her sister: Betty Walters of Brookville: and her lap dog: Sadie of Erie. She was preceded in death by her parents; loving husband; her son: Amos L. Smail; one brother: Charles Hannold; and five sisters: Ruth Walker, Mary Hickson, Esther Smathers, Sara “Sally” Raybuck, and Naoma Young. The family will receive friends from 2 p.m. to 5 p.m. on Thursday, August 27, 2020 at the Robert V. Burns Funeral Home in Clarion. Due to Governor Tom Wolf’s mandate, we are only permitted to have 25 people in the building at a time. Please limit your stay inside during visitation so we can accommodate all who want to pay their respects. The family has requested that masks be mandatory. A private funeral service will follow with immediate family only at 5 p.m. with Rev. Jim Davis and Rev. Ken Danser presiding. Services can be viewed via our facebook page at Burns Funeral Homes. A celebration of life gathering will be held for the family at the Trinity Point Church of God social hall in Clarion. Interment will take place in the Cederview Memorial Park in Strattanville. In lieu of flowers, Donations or memorials can be made in Wilma’s name to the American Cancer Society.

The family of Wilma J. Smail created this Life Tributes page to make it easy to share your memories.

Send flowers to the Smail family.